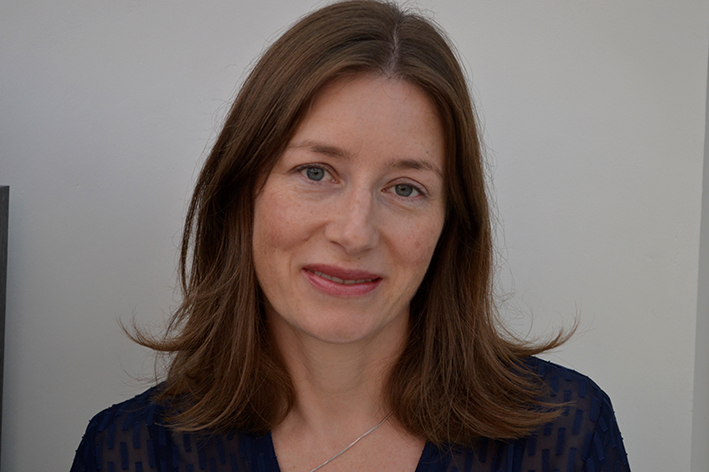 The importance of soil health

Soil is vital for our survival. 95% of global food supplies are produced on soil. It reduces flooding, filters water, absorbs and reduces pollutants, regulates our climate and the gases in the atmosphere, provides a habitat for soil-dwelling organisms (some of which aid pest control and pollination), protects cultural heritage, provides a stable platform for buildings, provides raw materials, and it could be the source of new life-saving medicines.1

After reading this lengthy list, it’s not difficult to appreciate Franklin D. Roosevelt’s statement that “the nation that destroys its soil, destroys itself,” a reference to the desertion of farms following the stock market crash of 1929, which caused the “dust bowl” in the Midwestern United States. Yet, despite reports that the health of our soil is under threat from climate change, population growth, urban development, waste, pollution, and the demand for more food and crops for bioenergy, soil has been overlooked in UK environment policy in recent decades, according to the Environment Agency (EA).2

In a 2020 summary on the state of the environment, the EA reported that in England and Wales, almost 4 million hectares of soil are at risk of compaction, which affects soil fertility, water resources, and increases the risk of flooding. Over 2 million hectares are at risk of erosion. Intensive agriculture has caused arable soils to lose 40 to 60% of their organic carbon, affecting agricultural production and our resilience to climate change. UK soils store about 10 billion tonnes of carbon, which is roughly equal to 80 years of annual UK greenhouse gas emissions. Also, soil degradation was calculated in 2010 to cost £1.2 billion every year.2

The UK government’s 25 Year Environment Plan3 is set to address some of these issues by tackling soil degradation and improving soil health while developing better information on soil health.

Soil health is defined as the continued capacity of soil to function as a vital living ecosystem that sustains plants, animals and humans. To gather data on the health of soil samples, there are two main categories of analysis. One is descriptive indicators, such as soil colour, texture and fertility, which are often used by farmers to understand soil quality. The other is analytical indicators, which are divided into three parts: biological indicators (organic matter, soil biology), chemical indicators (nutrients, acidification, contamination) and physical indicators (compaction, erosion and sealing).1

A chemical soil health investigation typically involves drilling boreholes across a site and taking samples from various depths, which are then sent to a laboratory for analysis. Physical properties may be assessed at the laboratory together with tests for ground gases and vapours (volatile organic compounds or VOCs). VOCs are analysed using a gas chromatograph-mass spectrometer. This provides a graphical readout that can be interpreted to show which VOCs are present and at what ratio in relation to each other.

What VOCs can tell us about soil health

Soil is teeming with microscopic life, such as bacteria, protozoa, fungi and nematodes and each performs specific functions.4 Some bacteria, for example, are nitrogen-fixing, some form plant galls, some use inorganic substances for energy, and others are decomposers that convert energy from plant litter into forms that are useful for the rest of the soil food web.

There is increasing evidence that VOCs play essential roles in communication and competition between soil microorganisms.5 Unlike other chemical analysis techniques, such as DNA or phospholipid fatty acid tests that use live or dead organic matter to determine which microbes are in a soil sample, VOCs could give a better understanding of which microorganisms are actively metabolising within the soil. However, VOCs in soil are diverse and include a range of compounds including carboxylic acids, alcohols, terpenes, amines, esters and alkenes.6 Detecting such a wide array across a large concentration range (many VOCs are present at trace levels) in such a complex matrix as soil is challenging.

Techniques for extracting soil samples for VOC analysis by gas chromatography-mass spectrometry (GC–MS) can help to overcome the challenge. These are: headspace (in which volatile compounds are extracted from the area directly above a soil sample sealed in a vial), headspace sorptive extraction (in which a probe coated in a sorptive phase is placed in the headspace for a fixed time before analysis), solid-phase microextraction (or SPME, in which a fibre coated with a sorptive phase(s) is used to extract VOCs), in situ extraction (in which a probe containing a sorbent sampling tube is inserted into the ground to gather VOCs by diffusion or pumped sampling) and filtration.

Although headspace–solid-phase microextraction (HS–SPME) has been the method of choice for soil sample preparation,7 and detection limits for SPME have been reported to reach parts per trillion (ppt) levels for certain compounds, SPME can be limited in its sensitivity by the amount of phase available on a SPME fiber (~0.5 μL). This leads to competition between analytes for absorption into the phase.

This has been overcome by cultivating the microorganisms individually by addition of a substrate to increase the relative concentration of volatiles;8 however, this can distort the original profile of the soil sample by removing the microorganisms from their normal environment, resulting in misleading interpretations.

Increasing the sensitivity of the analysis

A recent study has shown that this process can be avoided by overcoming the limitations of a single headspace–SPME extraction with the use of SPME–trap (SPME combined with a sorbent-filled focusing trap, which focuses analytes into a narrow band of gas that is injected into the gas chromatograph) and SPME–trap with multi-step enrichment.9 This maximises the sensitivity of the analytical technique to enable the detection of low levels of compounds. Maximum sensitivity is something analysts strive for to ensure that even compounds at trace levels can be detected to form a comprehensive VOC profile.

In the study, the researchers agitated samples of soil taken from a roadside in vials for one hour before three headspace extractions were taken and fed into the trap and injected into the gas chromatograph in one run (Figure 1). Combining SPME with a focusing trap enhances sensitivity by improving peak shape and allowing splitless analysis of the compounds while extracting the headspace multiple times drives the equilibrium by depleting the headspace of the sample.

Figure 1: Workflow for SPME–trap with multi-step enrichment. The extracted headspace volume is injected into an electrically cooled, cryogen-free, multi-sorbent-bed focusing trap where the analytes are refocused and preconcentrated. Following this step, the carrier flow is reversed (‘backflushed’) and the trap is heated rapidly (up to 100°C/s heating rate), transferring the analytes to the GC column in a concentrated band of vapour (~100 µL).

The team found that VOCs from a large variety of compound classes (including carboxylic acids, alcohols, terpenes, amines, esters and alkenes) were identified using both SPME–trap and SPME–trap with multi-step enrichment (Figure 2). The most prominent compounds identified in the soil sample were benzaldehyde, n-octanal, cyclosativene, calarene (a compound known to attract organisms to facilitate spore dispersal) and 4,9-muuroladiene. However, while SPME–trap resulted in 544 peaks, SPME–trap with multi-step enrichment delivered a total of 656 peaks. In addition, some compounds could only be detected using multi-step enrichment, for example, dodecanal, a known staphylinid beetle secretion. Without enrichment, an important piece of information about the soil would have been missed. 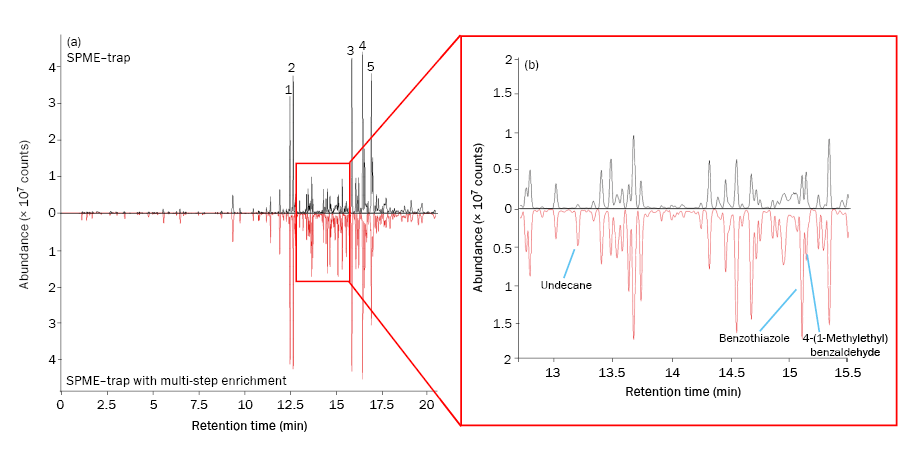 Figure 2: (a) VOC profile for a soil sample using SPME–trap and SPME–trap with multi-step enrichment, with the most prominent VOCs numbered: (1) benzaldehyde, (2) n-octanal, (3) cyclosativene, (4) calarene and (5) 4,9-muuroladiene. (b) A close-up of the chromatogram shows an increase in sensitivity from SPME–trap to SPME–trap with multi-step enrichment, in particular for undecane, benzothiazole and 4-(1-methylethyl)benzaldehyde.

As well as the state of microorganisms in the soil, VOCs can be used to assess soil contamination. Contaminants can come from agricultural and industrial sources, such as improper waste disposal, leaks from storage tanks and improper treatment of organic waste solvents from chemical plants. VOCs also migrate from the air, groundwater and wastewater into soil.

Common contaminants are petroleum hydrocarbons, pesticides and heavy metals such as lead. Cyanide has been found in soil, the chronic inhalation of which affects the central nervous system. Cancer-causing polynuclear aromatic hydrocarbons and BTEX compounds (benzene, toluene, ethylbenzene and xylene) have also been found in soil.

BTEX compounds are often detected around roads and other areas affected by emissions from the combustion of petroleum products such as petrol and diesel fuels. They are of concern because they are known carcinogens and endocrine disruptors.10 The clear determination of BTEX compounds within soil is therefore an important factor for environmental monitoring. BTEX compounds have a high affinity with apolar matrices such as soils, making them difficult to monitor, especially at lower levels.11 Using SPME–trap with multi-step enrichment (roadside soil samples agitated for one hour before being extracted three times), both BTEX compounds and microbial VOCs can be analysed in a single analysis. Multiple extractions lead to much higher responses for BTEX compounds, ensuring clear identification and quantification (Figure 3).

Figure 3: Peak areas from extracted ion chromatograms for SPME–trap and SPME–trap with multi-step enrichment, indicating the increase in response for the BTEX compounds in soils.

A wide range of VOCs linked to biological functions can be extracted directly from the headspace of soils using solid-phase microextraction (SPME). The sensitivity of SPME can be increased by using focusing trap technology and multi-step enrichment to give a more comprehensive VOC profile for soil health analysis.

When using multi-step enrichment, an additional 112 peaks were discovered from a soil sample, in addition to an increased response for contaminants (for example, the BTEX compounds).