Identifying microplastic and nanoplastic pollutants in the environment

A method called thermal desorption–gas chromatography–mass spectroscopy can be used to identify microplastic and nanoplastic pollutants in the environment. The method is simple to use and enables analysis of nanoplastics down to 0.2 µm in size in less than an hour. The information obtained could also help to identify the source of the micro/nanoplastics and give information on their toxicity.

What are microplastics and nanoplastics?

While legislation to tackle plastic waste increases globally, microplastic pollution has been overlooked, according to a UN report.2 This is set to change. In January 2019, ECHA (the European Chemicals Agency) proposed a restriction on the intentional use of microplastics in products placed on the European Union/European Economic Area market to avoid or reduce their release into the environment.3 The proposal is currently at the consultation phase.

However, detecting and analysing microplastics in the environment is challenging. The method must be able to detect and distinguish between all the different polymers that can be used to make a plastic, such as polyethylene terephthalate (PET), which is used to make bottles, polyvinyl chloride (PVC), polypropylene (PP), polystyrene (PS), high- and low-density polyethylene (HDPE and LDPE), acrylic, polycarbonate, nylon and fibreglass. Another issue is that additives, such as hardeners, flame retardants and preservatives, are used during the manufacturing process and microplastics can leach these additives into the environment. Also, other compounds can adhere to the surfaces of microplastics. For example, bisphenols have been found on their surfaces, and these have been identified as endocrine disruptors in the human body.5 So the method needs to detect these too.

The method should also be applicable to many sample types (for example water, air, soil, sediment and biota) and be able to detect the smallest nanoplastic particle to the largest microplastic particle. Fast and easy sample preparation is needed to improve throughput and minimise the risk of errors that comes with complicated preparation. The method should provide quantitative results, ideally in a concentration such as µg/L, enabling easier comparison across studies.

Techniques currently being tested include spectroscopic methods such as Fourier transform infrared spectroscopy or Raman microscopy, but they can only tell us which types of microplastics are present in a sample, not their concentrations, they are limited to particles greater than 10 µm and involve lengthy sample preparation procedures (hours to days).

Tackling the challenges of analysing microplastics

To tackle these challenges and to get ahead of regulatory requirements, Eurofins | IPROMA (Castelló, Spain), a company that diagnoses and measures environmental and industrial hygiene aspects, teamed up with Markes International (Llantrisant, UK), a company specialising in the quantification of trace amounts of volatile and semi-volatile compounds by gas chromatography.

In their investigation, the team used a chemical analysis technique, coupling thermal desorption with gas chromatography–mass spectroscopy (TD–GC–MS) to identify and measure how much of the plastic polyethylene terephthalate (PET) – used to make drinks bottles – had broken down and leached into the drinks.

PET is a general-purpose thermoplastic polymer. It is clear, strong and lightweight so is widely used for packaging foods and beverages. It was previously thought that bottles made with PET were benign but new research indicates that PET could be leaching into bottled drinks during storage. PET and other similar polymers have the potential to harm humans as they can interfere with oestrogen and other reproductive hormones.6

First, the team made up samples from bottled beverages – two brands of still water, a carbonated water and a cola – by filtering the liquids through 0.2 µm filter papers, before washing them to remove organic matter, leaving only microplastics on their surfaces. The papers retain microplastics down to 0.2 µm in size, enabling nanoplastics to be analysed too (particles less than 1 µm). The papers were dried in an oven for 30 minutes then folded and placed inside thermal desorption tubes ready for thermal desorption followed by analysis using GC–MS (Figure 1).

With Markes’ thermal desorption instruments, there are two stages (Figure 2). First, the sample tube is heated to enable volatile organic compounds (VOCs) to be emitted. A carrier gas sweeps the VOCs to an electrically-cooled focusing trap, where the compounds are concentrated – this maximises the sensitivity to enable the detection of low levels of target compounds.

At the second stage, the focusing trap is heated rapidly in a reverse flow of carrier gas – known as backflushing – to transfer the VOCs to the GC column in a narrow band of vapour for separation and detection. Backflushing enables a wide range of compounds to be analysed in a single run, which is essential for environmental samples in which the compounds are unknown.

Split flows can be applied at both stages of desorption to improve the desorption efficiency and handle wide concentration ranges. Also, re-collection of a split flow onto a clean sorbent tube allows a portion of the sample to be archived for re-analysis, saving time spent re-preparing the filter papers and avoiding the need to store large volumes of liquid samples.

The team ran analyses on a PET standard to find volatile marker compounds that they could use to identify and measure concentrations of PET – tetrahydrofuran (THF) was used to confirm its presence and 2,4 di-tert-butylphenol (2,4-DTBP) was used to calculate its concentration. This was done by calibrating the mass of PET against 2,4-DTBP peak area (Figure 3).

From their results, the team found that the bottled still water from Brand A displayed both marker compounds, confirming the presence of PET and enabling its concentration to be calculated (Figure 4 and Table 1). With the still water from Brand B, no 2,4-DTBP was detected, indicating that not all bottled drinks contain PET – different manufactures may have different production processes or storage conditions, or they may use recycled materials. Carbonated water and cola also gave positive results for PET. 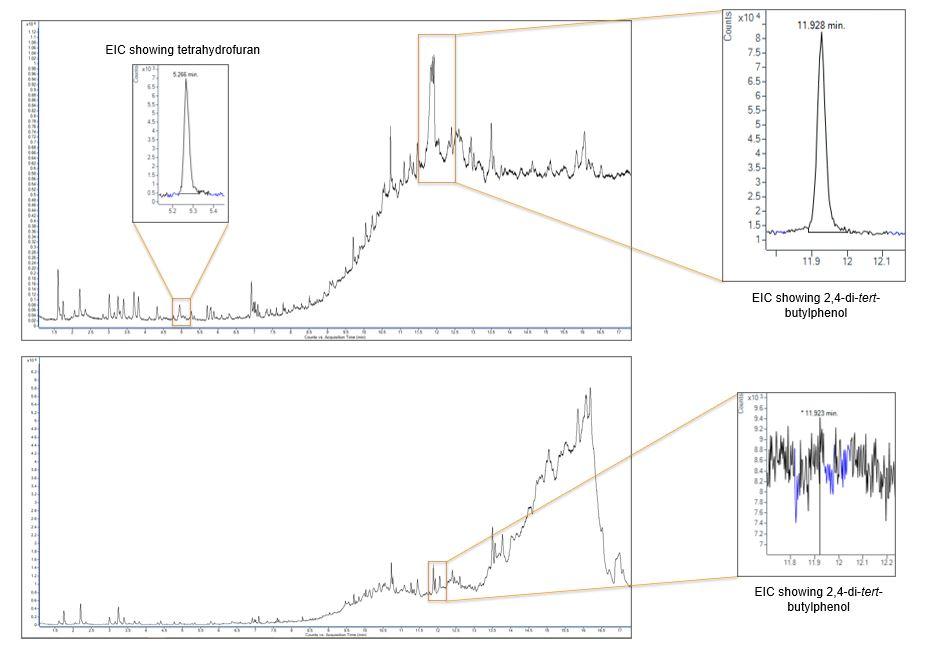 Figure 4: Total ion chromatograms showing the direct desorption of filtrate from bottled water. Brand A (above) shows a positive result for PET with the detection of DTPB and THF, whereas Brand B (below) shows no detectable levels of PET.

Table 1: Calculated concentrations of 2,4-DTBP for each sample.

These initial findings indicate that people may be exposed to PET as a result of drinking beverages from plastic bottles. Limits for human exposure to PET have not been determined, yet there are concerns that additives within PET or adsorbed onto its surface could be harmful. A US study on pre-production pellets and post-consumer plastic fragments found polychlorinated biphenyls and polyaromatic hydrocarbons – known carcinogens – on the surfaces of both.7

Using mass spectroscopy as the detection technique enabled the team to detect and tentatively identify additional compounds in the samples, such as dimethyl ether, acrolein and cyclopentane, all of which can be used in the process of manufacturing plastics, so could assist with identifying the source of the plastics (Figure 5). They also tentatively identified bisphenol A, which is often added during manufacturing to help harden plastics. Research suggests that BPA may be an endocrine disruptor in humans and has the potential to cause harm via thyroid and reproductive hormones, making it a compound of interest when assessing toxicity. 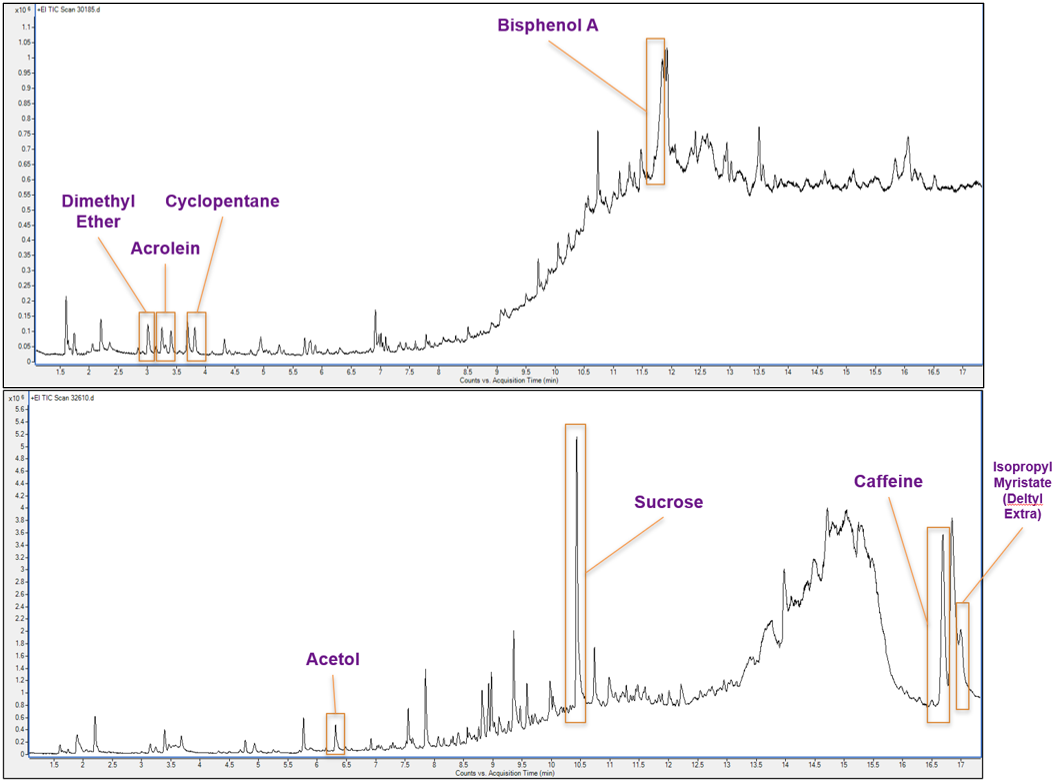 Figure 5: Total ion chromatograms of the bottled water sample (above) and bottled cola sample (below) showing compounds that may provide useful information for source profiling and toxicity.

As well as identifying chemicals used in the production of the plastics, the team detected other compounds such as sucrose and caffeine when analysing the microplastics from the cola sample. These are known components of cola, and food and flavour compounds Acetol and Deltyl Extra were also tentatively identified. This data could be useful in identifying the source of the plastic.

With this technique, different types of filters can be used, so the method can be applied to a number of sample types such as river water and wastewater, slurries from soils and sediments, and air filters, providing an analysis of multiple sample types from the same areas of concern for comparison.

As the technique is automated, this makes it easier to process large numbers of samples.

Providing data on concentrations will allow easier comparison across studies, which would also help with the development of standard methods and enable governmental agencies to produce enforceable guidelines and regulations.

Analysis of standards and real-world plastics, such as bottles, can be performed using the method to create libraries of marker compounds as well as supplementary non-target compounds for future comparison.

The results of this investigation indicate that thermal desorption–GC–MS may prove to be a key analytical technique for the detection, identification and measurement of microplastics and nanoplastics in the environment.